“May 4th, 1950 was the beginning of a forest fire known to the whole nation, not because of its size or spectacular losses, but because a tiny five-pound black bear cub named Smokey was rescued from it.” Dorothy Guck, newspaper reporter for the Lincoln County news.

The first of two fires began on Thursday, May 4th, 1950 when a cook stove over heated and started casting sparks. Fanned by winds of up to 70 mph, thus began the first of two forest fires in the Capitan Mountains. The Los Tablos fire burned approximately 1,000 acres before fire crews had it under control two days later on May 6th. It is believed that the second fire started on May 6th and was also human-caused. With the wind blowing very hard and having to cover over a mile of rough road to get to what would become known as the Capitan Gap fire, fire crews were in a race against time. It would prove to be a race they would lose.

On May 8th, a terrible wind made it impossible to control the fire and on this day nineteen soldiers from Ft. Bliss, Texas who had come to help fight the Capitan Gap fire were forced to escape to a rockslide while the fire burned over them. Remarkably they survived with just minor injuries. It was on May 9th that the face of forest fire prevention changed forever with the discovery of a badly singed bear cub.

Briefly named “Hotfoot Teddy” he was about to take his place in history as the “living symbol” Smokey. Found clinging to a charred tree, the tiny cub was brought back to fire camp by a group of soldiers from Ft. Bliss, Texas who had come to help fight the Capitan Gap fire. New Mexico game warden Ray Bell had been flying over the fire for fire boss Dean Earl and heard of the burned cub. Ray knew the bear needed medical attention and the best veterinarian he knew was in Santa Fe. Ray loaded the little cub in the airplane and flew to Santa Fe. Once there, Dr. Ed Smith was the vet who treated the cub’s burns, but it was Ruth Bell (Ray’s wife) and daughter Judy who deserve most of the credit for getting the little cub to eat.

Photographer Harold Walter took the first photos of Smokey while he posed with Judy Bell. The pictures captured the hearts of America. 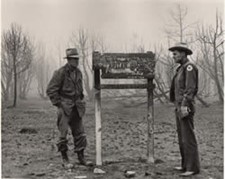 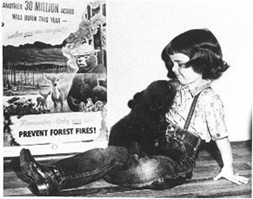